It’s been almost 25 years since the original PlayStation hit the market. You know how you hear people say “I’ll never forget where I was when…” well, the moment PlayStation released it’s OG console was one of those moments. As a 90’s kid, I can honestly say that this is a dream come true. A miniature version of the original console is set to hit stores on December 3rd, 2018! It’s going to ship in the original packaging.

The original Sony PlayStation, also known as the PS1 or PS, was released in Japan on December 3, 1994, and in North America on September 9, 1995. The PlayStation was the first of Sony Computer Entertainment’s game consoles. The console was an instant hit, and 100 million units sold worldwide. The device allowed consumers to play games with 3D graphics in their homes for the first time.

The new, revamped version is going to be identical to the original but will be 45% smaller. Remember, people. Size isn’t everything, it’s what’s inside that matters, and this little console is packing a punch! This small retro unit comes pre-loaded with 20 old school games, including Jumping Flash, Ridge Racer Type 4, Tekken 3, Final Fantasy VII and wild arms. Also included with the unit is two controllers, and an HDMI cable so you can connect it to your television. The console will sell for $99.99.

You will need an adaptor to plug the console into the wall, however, because they don’t include one. (They always get you somehow, don’t they?) I don’t even know how they decided an adaptor was an optional item. Why not only include one controller and the adaptor instead. Because that would be a decent thing to do? Little Timmy is going to open his Christmas gift, and he’s going to be pretty upset. Come on, Sony, be kind to the kids!

One thing I don’t particularly like about this is the preloaded game list. The 20 game list is set and can’t be updated in any way. This kind of upsets me because there were a lot more games that I liked. 20 games just aren’t going to cure the itch. Hopefully, they’ll rethink that. The 20 game cap limits the fun you can have with it, in my opinion.

As a parent of 3 children, I know how much time it takes for kids to get bored. Instead of pre-loaded games, why not give us the option of purchasing game packs? At least the experience would never get stagnant. 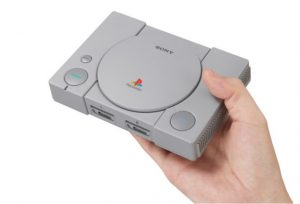 And who gets to pick what 20 games are on there? I mean, that’s not fair! If they have some 20-year-old gamer picking old school games, we’re all screwed! They don’t know about classics! Okay, I’ll stop whining now. I guess we will all have to keep our fingers crossed that they have someone at Playstation that knows the beauty of Metal Gear Solid and Resident Evil.

The console is already available for pre-order at certain retailers in the USA and Canada. If previous retro console sales are any indication, these are going to sell like hotcakes! Happy Gaming, Peeps!

Coffee lovers rejoice! Coffee Day is coming.
Next Post: Mayor Thinks The Name of the Town’s Paper Will Leave a Stain on Uranus