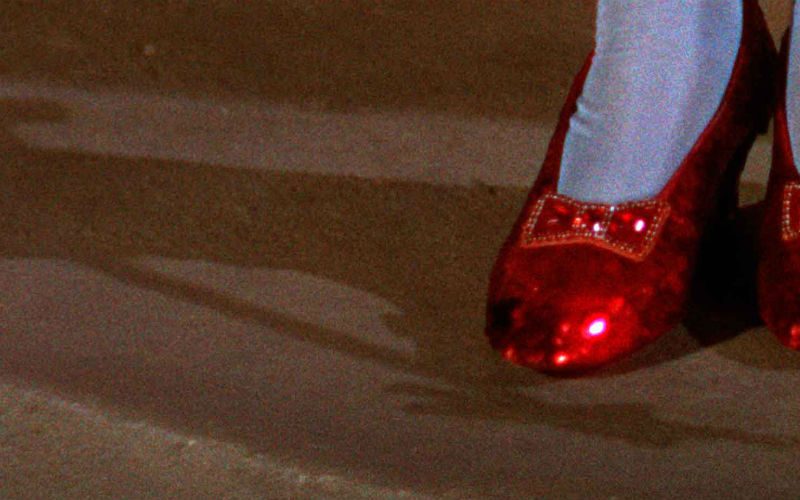 U.S. authorities claim to have recovered the infamous pair of ruby slippers that were once worn by Judy Garland in the iconic classic movie, “The Wizard of Oz” 13 years after they were reportedly stolen.

The ruby slippers were allegedly taken when a thief broke into the Judy Garland Museum in Minnesota, Grand Rapids. It was a somewhat easy feat to accomplish, as all the thief needed to do was to destroy the glass display and snatch the slippers. The perpetrator did a pretty good job of it too, leaving absolutely no clues behind – no footprints and no fingerprints – leaving the authorities without any leads. Strangely enough, the surveillance camera that night was also malfunctioning, allowing the criminal to break in undetected.

Merchandise collector Michael Shaw, who initially loaned the slippers to the museum, was left feeling devastated. “I felt like I was hit in the stomach when I got the call,” said Shaw in an interview to Newsweek in 2015, “My knees just buckled and I collapsed on the floor. The ruby slippers have been in my care for the past 35 years!”

It has been reported that Michael was so concerned about the slippers that he didn’t allow the museum to store them in a vault every night. He feared that workers might damage them with all the back and forth activity.

The museum’s co-founder, Jon Miner, expressed disbelief that his museum could become a target of such a clean heist. “I cried. I couldn’t believe this was happening to us! It was the craziest thing!” said Miner.

The case caught so much mainstream attention that a documentary was released in 2015 called, “Who Stole the Ruby Slippers?” As a result, numerous conspiracy theories were surrounding the entire theft, but the most popular opinions were that the theft could be an inside job with Shaw paying someone to steal them for him to collect on his insurance policy. The shoes were insured by Shaw for $1 million. However, Mr. Shaw only received $800,000 of the insured amount due to the lapses in security measures.

So why are the Shoes So Important?

According to the Hollywood Reporter, “The Wizard of Oz” ruby slippers are adorned with 2300 sequins, studded with burgundy sequined organza and lined with leather. They were originally designed by MGM’s craftsman, Adrian Adolph Greenberg.

To celebrate Dorothy’s famous shoes, Western Costume created a replica. A decade later, the pair sold for $666,000. Since 1979, this pair can be viewed in the Smithsonian’s National Museum of American History in Washington, D.C.
After enduring so many decades, the shoes had worn out their sparkly luster, prompting the museum to launch an online campaign to raise money and restore their beauty. The shoes have since been valued at $2 million to $3 million. Depending on the result of the auctions, they are thought to be worth as much as $5 million. The enormous price tag would make it extremely difficult to sell them on the black market, and hiding them out of sight would be no simple task either.

Why the Heist was a Bad Idea from the Start.

The ruby slippers were one of the most iconic items featured in the movie, “The Wizard of Oz,” and given their value of more than $1 million, whoever stole them would have a hard time trying to sell them in back-channel markets due to their extremely high profile recognizability.

Dorothy’s stolen ruby slippers eventually caught the eye of the authorities, and the slipper napper was captured. Her ruby slippers continue to shine brightly to this very day.

Boys Toys from the 1980’s
Next Post: Six Ways to Get in Shape Fast