Humor Bible sources have uncovered that B.J. Rowling, cousin to J.K. Rowling of Harry Potter fame, has a new novel out, released by Olympia Publishers of London. The title of the book is “The Misfit Tribe and the Secret of Mystery Island,” written by herself and her co-author, D. G. Lloyd. This is the first in a series of six young adult fantasy adventure novels.

We recently caught up to B.J. to ask her some questions plus to share some additional information and a synopsis of the book. 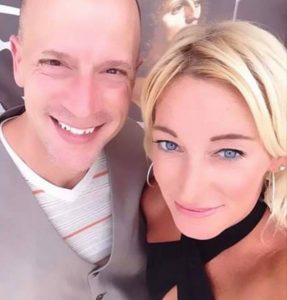 Some secrets are best kept hidden…and some are just too magical not to share.

The first novel in a series of six by B.J. Rowling, cousin of Harry Potter author, J.K. Rowling and her co-author, D.G. Lloyd, “The Misfit Tribe and the Secret of Mystery Island,” centers around fourteen-year-old Jonathan J.J. Hanks and his band of misfit friends. They embark on a quest that began two centuries ago when great-great-great-grandfather, Porter Hanks, a disgraced Lieutenant in the American military, fell upon a forbidden treasure during a siege by British forces in the War of 1812.  The controversy surrounding the mysterious event has plagued the Hanks family ever since, and now, with the help of his adventurous companions, J.J. has the opportunity to clear the family name and rewrite history.  After unearthing six enchanted talismans, the teenagers unexpectedly acquire a vast collection of magical, mystical powers and abilities.  The discovery of an ancient map leads the young band of misfits on a quest for buried treasure to a mysterious island filled with hidden secrets, booby traps and a villain who will stop at nothing to get what he wants.

Humor Bible: “Congratulations on your book release. When will the book be available worldwide?”

B.J.: “Thanks so much! It’s available now worldwide. It’s on Amazon.com, Barnes & Noble, Booksamillion, Waterstones and wherever books are sold!

Humor Bible: “What is the series about? Can you give us a little info?”

B.J.: Absolutely! The first book is really if you can imagine, a “Goonies” meets “National Treasure.” A group of best friends go geocaching on Michigan’s beautiful Mackinac Island and discover not only treasure but also the essence of themselves and long-lost family secrets.

Humor Bible: “Did you get any input from your famous cousin on your book series?”

B.J.: No, but she knows about it, and I really hope to get her involved at some point. It would be fantastic! I mean, she’s so talented and has really inspired me to fulfill my dream. 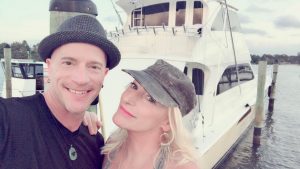 Humor Bible: “I hear a rumor that you’re already in the works for a movie for the first book, “The Misfit Tribe Secret of Mystery Island.” Is that true?”

B.J.: Yes! It’s a really exciting time! We have a movie deal in the works and plan to begin shooting as soon as possible, with a release date of sometime late 2019.

Humor Bible: “Thanks for taking the time out to chat to us today. I’m sure the book will be a new bestseller!”

B.J.: “From your mouth to God’s ears! And thank you very much! It was a true pleasure!” 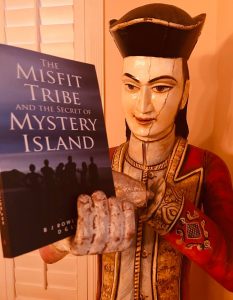 “The Misfit Tribe and the Secret of Mystery Island” currently has five-star reviews on Amazon.com:

“What a grand adventure! The Misfit Tribe is non-stop excitement from beginning to end.  This book makes reading fun for both teens and adults alike.  I can’t recommend it enough, and I am buying copies for my friends.  The Misfit Tribe has elements of Indiana Jones, Harry Potter, National Treasure, and The Goonies all wrapped up in one great book!” –Kristina Lombardo

Time To Glitter Up Your Holidays
Next Post: Helpful Tricks to Cooking Your Thanksgiving Turkey.