Getting the flu shot is the best way to avoid contracting and spreading Influenza to others. Although it doesn’t always protect you, it’s still better odds than not getting it at all.

This years dose of flu shots will offer protection against three or four of the most prevalent influenza viruses that are expected to be in circulation this flu season. A high dose flu shot will also be available for senior citizens over the age of 65.

Influenza is a respiratory infection that can cause deadly complications primarily to young children, older adults and people with lowered immune systems. Flu shots, although they are not 100% effective, are the best way to prevent the devastating effects of the flu and its complications. The CDC (Center for Disease Control) recommends that everyone over the age of six months gets vaccinated annually for influenza.

Even though it seems that this would be a clear cut and dry case, there are a lot of common misconceptions and myths about the flu shot and its side effects and effectiveness. We’re going to discuss those now.

1. “Healthy People don’t need to get the flu shot.”

This statement isn’t true because even healthy people aren’t safe from the flu. Anyone can get the flu. While it’s easier for young children and older people to contract the flu, the flu isn’t selective. We’re all at risk.

While influenza may cause horrible cold symptoms like sneezing, sore throat, runny nose, and coughing, those are just symptoms. Those symptoms aren’t what makes the flu so dangerous.
In the United States alone, 35,000 people die, and more than 200 thousand are hospitalized every year because of the flu.

3. “I can’t spread the flu virus because I feel fine.”

20-30% of people that are carrying the flu virus feel fine and have no symptoms. Even if you don’t know you have it, you could still be carrying it and spreading it to every person you encounter. 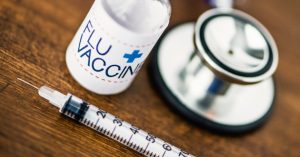 The flu is a virus, and chicken soup isn’t going to make it go away. Chicken soup can provide some relief for your sore throat and cough and give you some much-needed fluids, but it’s no match for influenza.

5. “I don’t want to get the flu shot because it will give me the flu.”

The flu vaccine is made from the inactivated virus and can not transmit the infection. Some people get sick shortly after getting the flu shot, but those people had already contracted it before the shot and didn’t know. It can take up to two weeks to get any protection from the flu vaccine. People just automatically assume because they got sick after the shot that the shot is to blame.

So, now that we’ve covered some of the common myths, let’s discuss the effectiveness of the influenza vaccination. Recent studies show that the flu vaccine can reduce the risk of contracting the flu by as much as 60% as long as the most circulating viruses are well matched to this year’s vaccine.

A big reason that the CDC is finding that parents aren’t getting their children vaccinated is that they’re worried about the safeness of the vaccine. Thirty percent of parents said that they think the flu shot is a conspiracy, while 28 percent believe it can cause serious diseases such as Autism. This conspiracy theory is misinformation, and public health officials are working hard to change this.

It’s not too late to get a flu shot. You can call your local pharmacy or health department, and they will help you find a flu shot clinic near you.

Cocktail Recipes That Are Guaranteed to Warm You Up!
Next Post: Lego Is Making Sets For Adults and We Have Already Picked Our Favorites