You are here: Home / Entertainment / The ‘Underwater Waterfall’ Natural Illusion 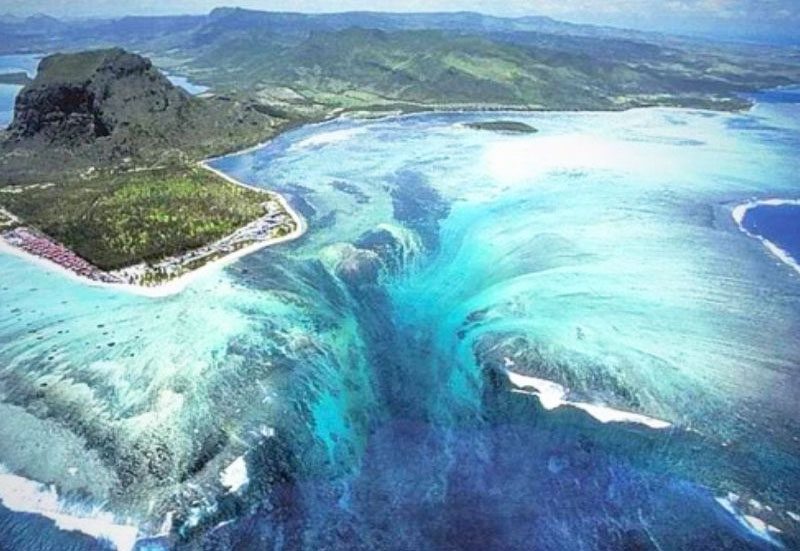 An Underwater Waterfall has become a viral sensation on social media while throwing many skeptics off their feet and bewildering scientists. The ‘underwater’ waterfall is actually an optical illusion courtesy of nature itself.

The location of the underwater waterfall is Mauritius, a tiny little piece of paradise surrounded by endless swathes of the Indian Ocean. This waterfall can be seen right across the coast of Le Morne. When seen with a panoramic view from above, the waterfall gifts spectators with a fantastic illusion.

An easy way to explain it would be that it looks like a waterfall underwater, so you would be forgiven for entertaining the thought that the Earth was collapsing in on itself. We can imagine what may go through the minds of folks who get nightmarish ideas about sea monsters crawling out to drag them into the endless abyss.

Is It the Work of Humans?

Despite advancements in fluid mechanics and manipulation of water, liquids don’t just ‘sink in’ on themselves like the picture seems to suggest. Instead, there is geological reasoning behind the breath-taking optical illusion. While many skeptics would jump to the conclusion that it is an image manipulated in Photoshop, it is indeed very much real.

The Phenomena Behind the Underwater Waterfall

Sand from Mauritian shores is being forced off the shelf by ocean currents into the darker depths of the ocean. The word to focus on is ‘shelf’; a plateau that didn’t exist until just a few million years ago. This plateau was introduced as a recent addition to Mauritius’s geology, thanks to seafloor spreading. The drop-off point from the ocean shelf ranges from 8 meters to 150 meters, creating a massive rift between both heights.

The potential difference between the two extremities serves as a mechanism for the sand to get swept away from under Mauritius’s shores.

Observing a satellite photograph retrieved from Google Maps reveals a slightly different perspective and this time the sands look more like a vortex that you could pass off as a hurricane in the making.

The History Behind Le Morne

Le Morne has a unique cultural history behind it. It was once used as shelter by runaway slaves and pirates in the 18th century which continued till the 19th century. The location was secured by isolated cliffs above mountains and normally inaccessible by intruders. Over the course of the years. Le Morne became known as a symbol of resistance among slaves who sought refuge from their captors.

The Best ‘One Liners’ Ever
Next Post: The Best Cover Up Tattoos